One pleasure of walking the beach is making new discoveries. There’s always something delightful at my feet. Because I walk nearly the same times each day, the beach is never the same. The tide may be high, or low, or somewhere in between. Tides are best imagined as water sloshing back and forth in a bathtub. They’re the natural rise and fall of the ocean’s surface caused by the interaction of the gravitational pull of the moon, and the sun to a smaller extent, and the Earth’s rotation. Monterey Bay typically experiences two sloshes a day. 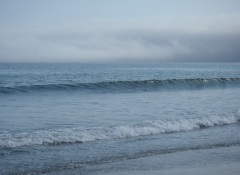 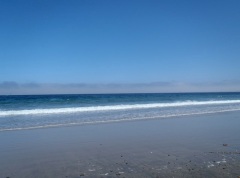 Most days the bay has two different high tides and two different low tides — a mixed semi-diurnal pattern — typically there’s a high high, a high low, a low high and a low low tide. The cycle shifts by about 35 minutes each day and sea level changes are between 3 to 6 feet (1 to 2 m). The daily ebb and flow and cycle are what make the beach different for each walk. In addition, the surf may be pounding and washing marine life and debris onto the shore, or lapping and revealing surprises in the sand.

My newest beachcombing discovery has been the Nassarius snail with common names such as channelled basked shell, giant western dog whelk or channelled nassa (Nassarius fossatus). I spotted a lovely shell on the sand and, to my surprise, it was alive. This snail is about 2 inches long (5 cm) and crawls along the surface or buries in the sand. 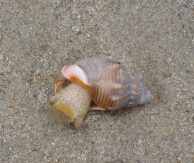 It’s primarily a scavenger and uses its siphon to “sniff” for food, such as dead fish, maybe molting crabs, and even cadavers. It’s also opportunistic and will prey on other invertebrates.

A recent study of benthic (bottom-dwelling) species in Monterey Bay found that while feeding, this snail (and several other species including the fat-innkeeper worm and Emerita sand crabs) pick up the neurotoxin domoic acid from Pseudo-nitzschia australis diatom blooms. Tissue samples showed the toxin at levels exceeding what’s considered safe for the snail’s predators, hence contributing to the poisoning of marine birds, sea lions and the endangered California sea otter. (See more below about the Emerita sand crabs.) 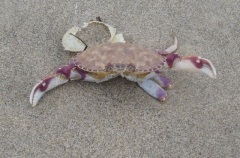 Crabs always catch my attention and can lead to surprises. I thought this little gem (Cancer gracilis) was alive when I first happened upon it, but it didn’t move as I got close. I gently touched it, and nothing happened. When I turned it over, I found it was empty — a discarded molt. 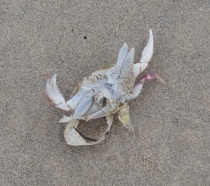 Crabs grow via a chemical and physical process called molting (or ecdysis). During the process, a crab develops a soft new shell inside the hard old one. To crack the hard outer shell, it absorbs water, and then slowly backs out, leaving the molt. In the photo, this graceful crab left a near-perfect ghost of itself. Because the new shell is soft (a tasty treat), the crab hides in a protected spot until its shell hardens. 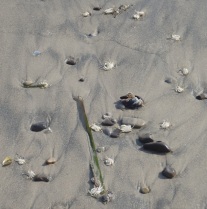 In addition to graceful crab molts, the beaches have been littered lately with Dungeness crabs (Cancer magister) in various stages of molting — from empty shell bits to soft crabs to wriggling stranded hard ones. These young crabs may molt as many as a dozen times before they become adults.

Crabs and their molted shells (carapaces) are the most common items I find on the beach. Sand crabs are by far the most numerous, so much so that I tend to ignore them. But there are two species, and when side by side, the difference is dramatic. 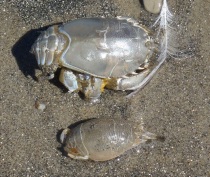 The sand crab, Emerita analoga, growing to about 1.5 inches (3.5 cm), is the smaller and the mole crab, Blepharipoda occidentalis, growing to 2.5 inches (6 mm), is the larger. They both bury in the sand and feed on plankton they collect with antennae as water washes over them, but when mole crabs become adults they scavenge, mostly on dead sand crabs. Based on the number of sand crabs I see, there’s plenty to eat. 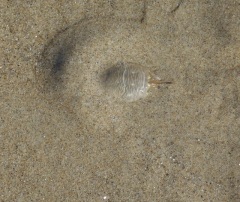 Shorebirds, fishes and sea otters also dine on them. These crabs are indicator species, that is, like canaries in a coal mine, they are useful in determining the quality and health of local waters. They’ve served as indicators of DDT residues and the prevalence of domoic acid. Sand crab species also host parasites that have been implicated in the poor health and deaths of sea otters and surf scoters (SIMoN website) that eat them.

Amazing how small discoveries on the sand can connect to wider ocean and conservation issues.

California Department of Fish & Wildlife: Dungeness crab of California and its close relatives.
Fishery information is also available on the CDFW site.

← More jelly blobs on the beach
What kind of seashell is this? →