Spring has blown into the bay with strong northwest winds (our springtime signature). For more than a week winds have been fairly steady – at up to 30 mph (26 knots or 48 km/hr). It’s been nice for sailing and kite-flying. Not so for kayaking, hence I enjoyed a beach walk yesterday. First, I checked the breakwater for progress on the sea lion-cormorant tussle, and not much has happened since my last post.

The steady blow, along with large swells, has ruffled the bay, and I think kept the birds grounded. They haven’t been able to gather nesting materials. Winds will be calmer this week, closer to 10 mph (about 9 knots or 16 km/hr). It will also be sunny and there’s no rain in the forecast for a while. The cormorants should be able to get back to work.

I also strolled by the harbor seals on the west beach at Hopkins Marine Station.

No births yet. It’s still a bit early, but with the sunny, rainless winter we’ve been having, who knows? Sharing the warm beach was the regular lone elephant seal (in the upper right corner), snoozing away. The much smaller harbor seals give him plenty of space.

Even though not much had changed since my last visit, it was a good day for a walk.

As a child, I collected seashells and other interesting objects I found on the beach. These days when I walk the beaches of Monterey Bay, I don’t find the same things. I find bottle caps, plastic bottles, food containers, balloons, shoes, toys… the list goes on. During recent kayak trips, I’ve picked up a floating green tub and a child’s pink crocs shoe.

Sadly, marine debris is everywhere. We know it’s unsightly and harmful, but did you know that it’s also costly?

According to a 2012 study (Stickel et al.), that I just read, combatting marine debris costs the three U.S. West Coast states an estimated US $520 million — more than half-a-billion dollars — each year. (This doesn’t account for waves of debris on the way from Japan’s 2011 tsunami.)

Because everything eventually flows to the ocean, this cost included beach and waterway cleanup, street sweeping, installation of stormwater capture devices, storm drain cleaning and maintenance (Did you see the Dirty Jobs storm drain episode? So gross!), manual cleanup of litter, and public anti‐littering campaigns (to encourage us to be decent citizens).

Just think of all of the other important things we could spend that money on if we weren’t spending it on debris control and cleanup. So please, share this news and watch your waste. Dispose of it properly (check with your local waste management agency), join a cleanup event, and when you encounter debris on the beach, pick it up and trash it. Every little bit you do helps. This has always made environmental and civic sense, and now it makes economical sense, too.

365 Days of Trash: One man’s attempt to throw nothing away for a year… and beyond. This blog has good tips for reducing waste.

Daily Ocean: A beach cleanup revolution. The next chapter for Sara Bayles who blogged about her collection of over 1,300 pounds of trash off her California beach during 365 beach cleanups.

Barking, raucous sea lions have been dominating the Monterey breakwater. It’s a perfect spot for young males (mostly) to rest in the winter sun. But that’s about to change. 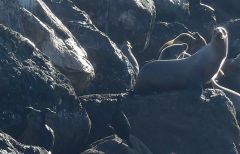 Yesterday a cormorant carrying a wad of algae and seagrasses flew past me. It was my first sighting this season of them nesting. Soon cormorants (mostly Brandt’s on the breakwater) will take the territory and dominate it through summer. I’ll be watching and keep you posted on this annual cycle. (Visit my bestiary for more about local California sea lions or species of cormorants.) 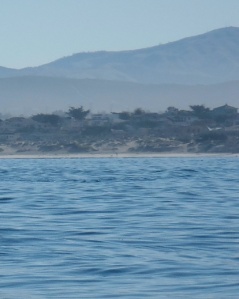 As I write this, it’s amazing outside: calm, clear, warm — 74° F (23° C) — and February.  I don’t often get onto Monterey Bay in February because of rainy, windy weather and large swells. Yet I was going this morning, and had looked forward to a beautiful, easy paddle. But, that’s not how the day started. The bay was bouncy.

Monterey Harbor is bordered on the west side (top right)

by a U.S. Coast Guard pier and breakwater (built in the 1930s) and on the east side (bottom) by an active commercial fisherman’s wharf (Wharf II which was built in 1926). Between these structures is another wharf (Wharf I was first built in the early 1870s) — what our visitors know as Fisherman’s Wharf. A sea wall extends from Wharf II to Wharf I and encloses the Monterey Municipal Marina. (There are additional docks and mooring areas inside and outside the harbor.) I typically launch off the beach (bottom left), paddle along Wharf II and past the breakwater to reach the kelp beds off Cannery Row on the other side.

On days like today, when I kayak the harbor, I start on the outer edge of Wharf II, then duck under the wharf between pilings into the harbor. Inside I meander toward the breakwater and finish by crossing open water between the end of the breakwater and end of Wharf II to return to where I started. Within this loop is amazing history and interesting boats, but I search for wildlife, and I’m never disappointed.

Along Wharf II today, before I even got into the harbor, were a trio of hearty, handsome male surf scoters (Melanitta perspicillata).

Surf scoters are sea ducks that visit our area in the winter and probably will migrate away soon. On my beach walks I usually see them in small to large groups just beyond and in the breakers. In the shallow water, they dive for dinner: clams, crabs, snails and other invertebrates stirred up by the surf. These three paid me no mind.

Paddling between the pilings and along the sea wall, I was rewarded by colorful orange and purple seastars (Pisaster ochraceus)

which are revealed by most low tides. (If you want to learn about the color variety, read this post on The Echinoblog.) These stars stick as if mounted, but because their locomotor system is hydraulic, I assume they don’t move much until the water returns. Then they commence feeding on attached mussels and barnacles.

My favorite spot inside the harbor is past Wharf I. It’s a stretch of shore that’s part of Fisherman’s Shoreline Park. This is a seal haven. At low tide, harbor seals (Phoca vitulina) snooze atop all of the waterline rocks. They’re everywhere and here year-round.

Once I had a visitor ask me why there were so many dead animals in the harbor, and I explained about the stillness of sleeping harbor seals. If you watch long enough, you’ll see them move or hear them snort at one another. They watched me lazily as I paddled by. (There’s more about harbor seals in my bestiary). Today’s harbor seal retinue included seagulls, egrets and pelicans.

Most of the brown pelicans (Pelecanus occidentalis) I see along our shore are immature birds, and at least some are around year-round. 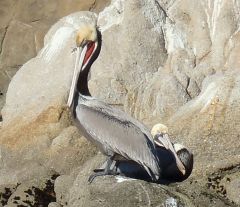 Adult birds are here from fall through spring, and this one in full breeding plumage perched above the harbor seals was a great find. These birds breed in large colonies on the Channel Islands off Santa Barbara. The mature adults will be with us till spring, then they’ll head to the islands. As you may know, we almost lost these amazing animals to the pesticide DDT. DDT weakened their egg shells, which were crushed by the adults’ feet during incubation. Since DDT was banned in the U.S. in 1972, brown pelicans have been making a comeback. In 2009, they were delisted from the U.S. list of endangered and threatened species due to the population’s recovery. Off California, their breeding areas are protected in the hopes the population will continue to grow. They’re impressive birds, whether standing stately on rocks or gliding elegantly past my kayak.

A group of birds in the harbor year-round are the cormorants (for details about our three local species, visit cormorants in my bestiary).

This time of year Brandt’s cormorants (Phalacrocorax penicillatus) commandeer the breakwater for courting, mating and nesting. It’s entertaining to watch them move sea lions off the rocks by nagging, poking, pecking and making a nuisance. I noticed today that the Brandt’s are starting to sport their breeding colors, blue throat and fine white “whiskers,” but I didn’t see any nesting yet. The pelagic cormorants (P. pelagicus), which I see more often when in the kelp beds, have had their white flank patches for a while, but no sign of nesting materials yet.

As I left the breakwater and headed back toward the beach to end my trip, I was rewarded by a sea otter (Enhydra lutris) sighting. It was a surprise for both of us  —

the otter popped up next to me, then with a startled look quickly disappeared. I don’t always find sea otters in the harbor (I do in the kelp beds), but they’re fairly common and, in the spring, it’s not uncommon to encounter a mother with pup seeking calm waters. (You can read more about sea otters in my bestiary.)

Whenever I want to kayak and bay waters near me are too rough, I can rely on the harbor to make a paddle worth my while. I encourage you to find a place near you where you can view wildlife no matter the conditions.

The Cornell Lab of Ornithology All About Birds: Surf scoter, brown pelican

I recently discovered surfbirds (Aphriza virgata) with the help of a local birding group. Unless you’re looking for them,
or watching rocks and one happens by, they’re hard to spot. I’ve seen them at the surfline on Monterey’s Coast Guard breakwater and along our rocky shores. They’re small, stocky gray birds (I know, non-descript) and easy to confuse with turnstones, which share the same space, however surfbirds have yellow legs.

Scientists have had a tough time classifying surfbirds. They’re in their own genus in the sandpiper family (Scolopacidae). But there’s question about whether or not that’s right. They’re viewed as an intermediate between turnstones (genus Arenaria) and knots (genus Calidris) with characteristics of both (Livezey 2010). Some think that they may be more closely related to knots.

Along Monterey Bay, most surfbirds are winter visitors (although some stay on as residents according to the SIMoN species database). They actually winter along the shore from Alaska to Chile. I’m not sure why I’ve never noticed them before, maybe not paying attention or mistaking them for turnstones (this photo shows a surfbird in front of a turnstone — they do look different when side-by-side).

Like turnstones, surfbirds dodge the surf while probing rocks for molluscs (snails, barnacles, etc.) and crustaceans (crabs, etc.) The Cornell Lab All about Birds site says they pull up mussels and barnacles and swallow them whole (one wonders how the rest of the digestive process goes).

I admire anything that can make a living in the intertidal, especially along the surfline. It’s a physically rough place. These small, tough birds, amid the raucous sea lions and gulls, are interesting to watch when you can find them.

The Cornell Lab of Ornithology All About Birds: Surfbird