This name evokes an image of an inebriated medieval peddler hawking gossip along with his wares. From the first time I heard it, the name fascinated me, and hence the bird with this name does, to0. 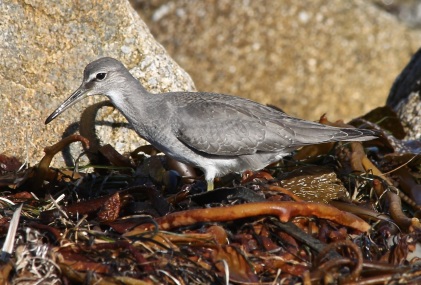 The wandering tattler (Tringa incana) is a medium-sized sandpiper with a white eyebrow above a dark eye, yellow legs, beautiful gray flight feathers, and a white belly. In addition to the color pattern, this bird is easy to spot because it doesn’t just walk along the shore looking for insects and tidbits to eat — it bobs and teeters as it walks. It looks a bit inebriated.

Both times I’ve seen a wandering tattler it’s been in September, single birds migrating south from breeding in the mountains of northwestern Alaska and Canada. The good news is that its range is so widespread that its conservation status (IUCN) is Least Concern. 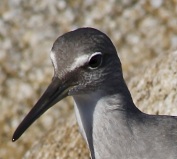 According to The Cornell Lab of Ornithology’s All About Birds, the “wandering” part of the name comes from its widespread occurrence over the Pacific ocean. The “tattler” part refers to its alarm call which alerts other birds to danger. In French, it’s called a “chevalier errant” and in Spanish, “playero vagabundo.”

All great names, and so apropos, for a shorebird that teeters along coastlines and into mountains from Alaska to Chile to the islands of the Pacific. 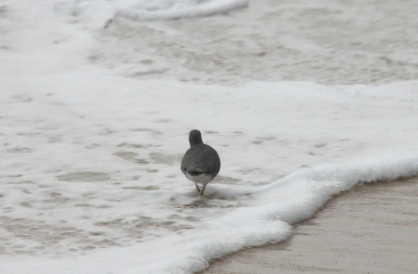 And, speaking of wandering tattlers, I’ll be walking the Coastside Trail along Half Moon Bay again with Slow Adventure this week and hope to post my best photos along the way.