Yesterday, the sky was bright blue and the breezes gentle. It was a warm spring day. But that was yesterday. Today, 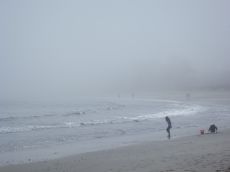 sadly, June gloom arrived — that gray blanket of wet summer fog. Although this may not sound like a downer, especially if you’re sweltering right now, but when we’re ready for fun and games at the beach, fog dampens the fun. And it’s not just today — it won’t warm up here until August (so this may be one of many fog blogs). 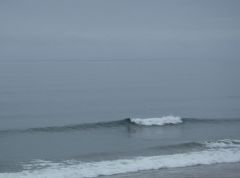 I hated the fog when I first moved to the Monterey Bay area. Where I came from summers were warm, not numbingly cold. Although attributed to Samuel Clemens (Mark Twain), he never said, “The coldest winter I ever spent was a summer in San Francisco.” But that sentiment perfectly captured my initial reaction to Monterey Bay summers — chilly, wet, monotonously foggy all day every day for weeks.

Why are our summers so cold? Basically, warm moist air from over the Pacific meets cold nearshore upwelled water (brought to the surface by spring northwesterly winds and the Coriolis effect). When that moist air cools, it condenses, creating a dense layer of marine air or fog. (You can sometimes see a fog bank sitting offshore, waiting to pounce.) 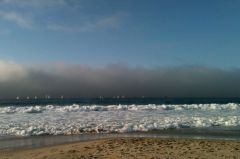 During summer, inland valleys such as the Salinas Valley heat up and the hot air rises, which sucks in the marine layer, blanketing the coast in fog. The warmer it gets inland, the foggier we get along the coast, especially the Monterey area and Moss Landing. (For more complete descriptions of the interactions of pressure systems, winds, currents and temperature differences that create our fog, visit Seasons in the Sea.) 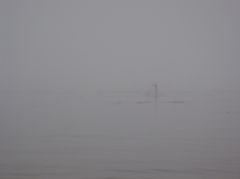 After decades of living with June gloom, I’ve made my peace with the fog. I bundle up when I go outside or get on the water so I don’t feel so cold. (I often dress warmer for summer than I do for winter.)

I take pleasure in watching fog banks as they creep in and out, up and over the hills and across the ocean. 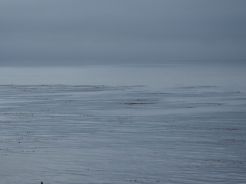 And when I’m on the water, I’m often dazzled by the play of light between fog and bay, and just let the soft colors and quiet soothe me.