Although not considered part of Monterey Bay (unless you’re a geologist), Point Lobos is a short drive to the south and on most days too gorgeous to ignore. I met my friend Deborah at the park and on this slightly cloudy, windy May morning, we walked, talked and snapped photos (despite both of us suffering from spring allergies). The dynamic interaction of ocean and rocks, wind and waves provided spectacular sights.

On Hidden Beach, we spotted mother-pup harbor seal pairs, some snoozing on the warm sand and others engaged in swimming lessons.

On Bird Island and other granite outcroppings, determined cormorants were constructing nests despite the day’s building winds. We watched bustling colonies of Brandt’s and a few solitary pairs of pelagics. While we walked, a duet of pounding surf and wind-rocked trees accompanied us.

The spray of ocean saltwater and ceaseless buffeting by winds gnarl cypress trees along the shoreline and some appear as forest characters.

On the cliffs above Cypress Cove, we encountered a stunning rust-colored growth that blankets the trees and rocks. 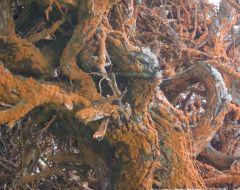 I was surprised when I learned that the orange fuzz is a green alga. It is rust orange instead of chlorophyll green because of beta carotene (which gives carrots their color) and other carotenoids. One study (Mukherjee et al. 2010) found that the total carotenoid concentration is higher in winter (hence a brighter color) than in summer. This alga (Trentepohlia aurea var. polycarpa) is an epiphyte, that is, it uses cypress trees (Cupressus macrocarpa) only as a growing surface and causes no harm, unlike a parasite. From my reading, it appears the species is found worldwide in damp places similar to Point Lobos, but the variety polycarpa is specific to our coast.

It was a beautiful day and great walk. I can’t wait to return to this precious California State Park soon to make more discoveries. Thanks, Deborah.