I thrill at finding new Monterey Bay creatures (new to me) and learning about them. 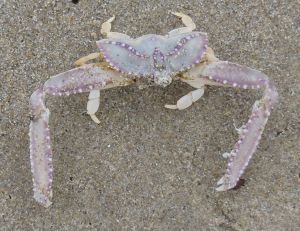 This morning I found this beauty on the beach. While taking photos, I spotted what looked like a dead crab or carapace. When I flipped it over, I was amazed by the purple and white details of a live sandflat elbow crab (Heterocrypta occidentalis), a species I had never seen before. Elbow crabs aren’t just new to me, they’re also relative newcomers to the bay.

In his 1969 book Seashore Life of Southern California, Sam Hinton wrote about the elbow crab, “It is mainly a tropical form, with Southern California representing the northernmost part of its range.” And, a 1995-1996 survey off Hopkins Marine Station by UC-Santa Cruz students, who were repeating a Pearse 1971-72 survey, found that elbow crabs, which had been rare or absent in the early 1970s, were common by 1996. It appears that the species has been moving northward.

These days we often see climate change reports of spring arriving earlier and terrestrial species moving north or to higher elevations. We’re less exposed (physically and via media) to species in our oceans making similar shifts. Less than 1% of the synthesis information on climate change on natural systems has come from marine life (Richardson et al 2012). Why has the elbow crab move into and become more common in the bay? What’s the impact of its expanding range? I couldn’t find answers — maybe no one knows. But we do know our world is changing and we need to pay attention to both the obvious and the subtle shifts. Have you noticed changes near you?

I carefully picked up the elbow crab (not being sure about it little pincers) and tossed it into the wash. With each successive wave, it slowly crawled sideways into the ocean.

As I was reviewing the photos later, I saw that the elbow crab wasn’t alone (and I consider myself observant). Near it was a ladybug beetle — a subtle reminder to slow down and look more carefully in the future.