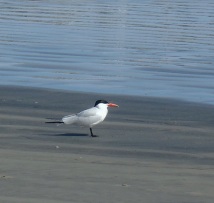 A Caspian tern (Sterna caspia) has been gracing Del Monte Beach for the past week or two. I typically see them around Monterey Bay this time of year. This is a stately bird, about the size of a gull, with a beautiful black cap, black legs and heavy orange bill.  So far I’ve seen only the single bird and she/he has spent most of the time standing on the shore, taking flight only when people and dogs approach.

Today was different. When I stepped onto the sand, the tern was already in the air. For nearly a half-hour, I watched its aerobatic maneuvers as it scanned the sea surface for fish (we’ve had shoals of anchovies in the bay lately). The tern’s performance was grand and graceful, a display of aerial mastery that I had to share with you. During your next beach walk, keep an eye on the sky (as well as on the water). 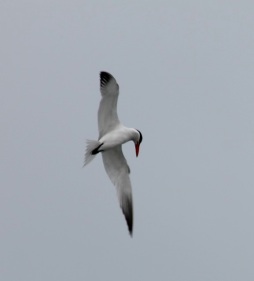