Monterey Bay’s mild winter weather attracts a variety of migrants and visitors from the north and south. Our winter wonderland provides for great coastal birding. These are winter guests spotted one morning last week from Monterey Waterfront Park and Del Monte Beach
(an extension of Monterey State Beach). 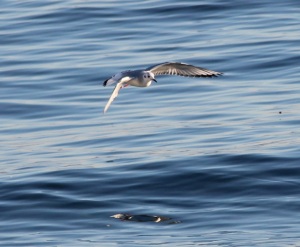 Bonaparte’s gulls are more like terns than gulls — they’re small for a gull, delicate and acrobatic in flight. They’re also easy to photograph as the glide, dip and dive for fish along the shore’s shallows and lagoons. These gulls are not in breeding plumage this time of year (no black head), but you can tell young ones (in the photo) from adults. The immature birds have black all along the wing tips and black along the backside of the wings. Bonaparte’s will winter here until their summer breeding grounds across Alaska and northern Canada warm up.

An autumn and winter visitor is the Heermann’s gull, a very distinctive slate gray gull with a red bill. This time of year we see an age range from first year through adult. (Most of the larger gulls take 3 to 4 years to mature. The coloration differs each year, which makes them a challenge to identify — a single species has several color phases before developing adult plumage. In addition, breeding plumage can be different from non-breeding. For more on identifying gulls, see my post Do you know your gulls?) 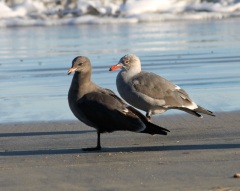 The single gull (in the photo above) is an adult Heermann’s in breeding plumage. The duo (photo to the right) includes two Heermann’s: a second-year bird (the closer) and a third-year bird (the farther). Soon these gulls (at least the adults) will be heading south to breeding grounds in Baja and Mexico. 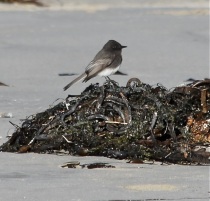 Along the beach among the gulls were two phoebes: a black phoebe and a Say’s phoebe. The black phoebe (left photo) is fairly common along the coast year-round. I often see them bouncing from fence post to post or kelp pile to pile in search of insect meals. Kelp flies are in abundance and might be what they seek.

I haven’t seen the Say’s phoebe before. It’s my understanding that they prefer more open and drier environments than our coast (although it’s been extremely dry here this winter and our sandy beaches certainly are open). This species is probably moving through, heading to warmer southern California and Mexico. The two phoebes are closely related, but didn’t look much like one another. However, their behaviors were similar. The Say’s flitted among the kelp wrack and along the shoreline seeking insects. They were fun to watch.

On the waters just beyond the surf (which was minimal) were a variety of diving ducks, some familiar and some new to me. One of the most familiar was the bufflehead. The bright white patch on the side of the head of the female and back of the head of the male makes them easy to identify. There were large groups of females heading somewhere important. I didn’t see many males. These birds will fly east and north in the spring. 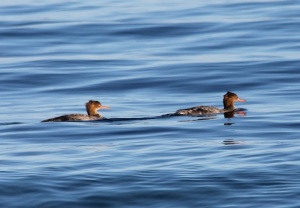 Another visitor that I find easy to identify is the merganser. The slender bill is distinctive, as is the shaggy feather-do. These red-breasted mergansers are migrants and it’s always a treat to see them because their stay sometimes is short. This duo was very busy diving and popping back up with little fish while they skirted along the edges of the other diving duck groups. 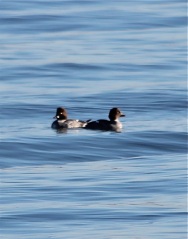 A bird new to me (I don’t know ducks very well yet) was the common goldeneye. Once I figured out the signs — white dot at the base of the bill and a chocolaty head — they were easier to spot. However, photos were tough because the birds were between me and the sun and they were very busy preening and diving. I got a lot of shots of tail feathers. As with many of the other birds, these are wintering here (and across much of the U.S.) until spring/summer when they return to Canada and Alaska.

A second new species for me was the greater scaup, also a wintering visitor from the north. This group had the sun at their backs and so were challenging to identify and photograph. (And, honestly, after a while, so many ducks on blue water all started to look alike.) The scaup had white around the base of the bill and looked more duckish than others. 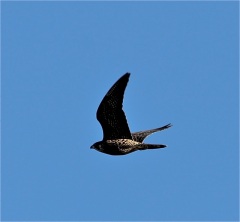 In addition to all of these, there were four other species of gull, three species of grebe, many surf scoters and a seemingly out-of-place ringed-necked duck. Joining in on our day’s birdwatching was a resident peregrine falcon.

It was a great day visiting with winter guests.

My thanks to my weekly birding group and
our patient, eagle-eyed mentor, Brian Weed.