A long walk at low tide

Rain is on its way (winter has barely visited this year) and so I took a long walk to enjoy a pre-stormy bay and this week’s daytime low tides. It was cool, and the sky and ocean were soft gray (not unusual here). 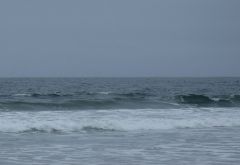 My walk started on the sandy beach below Del Monte Dunes in Monterey and ended on Moss Beach (where Asilomar State Beach meets Spanish Bay) in Pebble Beach — a lovely, easy 10-mile trek. Between the two stretches of beach are the rugged, rocky shorelines of Monterey and Pacific Grove.

The joy of a cloudy Monday in March is that the beaches and shoreline paths are mostly devoid of people. When bay beaches are deserted, turkey vultures are busy inspecting the coastline for a meal. Today was no exception. I happened upon one vulture working on a seal carcass and I stopped to watch it for a while. (Visit an earlier post for more about vultures.) I’m fascinated by such a scene because of its tenuous thread to a time when large animals frequented these beaches, when condors and bears scavenged beached whales. Not that I’d want to encounter a bear on the beach, but I feel the loss of such scenes forever gone. The mood was soon broken when a jogger bounced by, oblivious to the interruption, and the vulture took flight.

At the Monterey Harbor I walked down the Coast Guard pier and breakwater (see an earlier post for more about the harbor) to check on the sea lions and cormorants.

As usual, there was a roiling sea of sea lions, edgily jockeying for space and position. Unlike past weeks though, the rocks sported more gulls than cormorants. This was true for my entire walk and I’m still wondering were the cormorants had gone.

As the tide ebbed all along Monterey’s rocky shoreline, birds searched among rocks for tidbits — 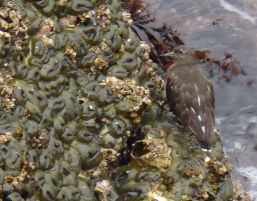 turnstones and surfbirds along the breakwater, snowy egrets in harbor shallows, gulls and crows everywhere. With predators afoot and life-supporting water temporarily gone, sea anemones had collapsed, muscles shut tight, and snails and barnacles closed their doors. It would be a few hours before the invertebrates would be free of the pesky, poking birds. But it offered me great glimpses into the rough and tumble world that I seldom see on the wave-washed rocks.

Farther along in Pacific grove, while watching the waves crashing on the rocks to my right, I was surprised by a great blue heron between my path and the coastal road on my left. It strolled majestically, noticing me, but showing no alarm. Cars stopped and took photos. I stopped and took photos. It didn’t seem to mind any of us, as if this was an everyday occurrence. I was delighted to have such a large stately bird beside me. They’re surprisingly tall — growing to 46 inches (117 cm). Normally when I see one, its neck is pulled in and it’s flying away after I’ve interrupted a hunt or disturbed a resting spot. 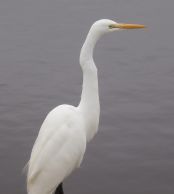 The other impressive bird that I encountered was at the Pacific Grove Golf Links, which has a freshwater pond (Crespi Pond) at Hole 17. The pond is normally a haven for American coots, but today a graceful great egret stood at the pond’s edge. I often see them fishing atop the kelp beds as I paddle past in my kayak. Getting this close was a treat. This walk was becoming a great one for sighting wading birds.

Just past the golf course, I officially walked out of Monterey Bay. Point Pinos marks the southern end of our “sheltered” bay (although much of the bay isn’t very sheltered) and the start of a shoreline exposed to the full force of the Pacific. 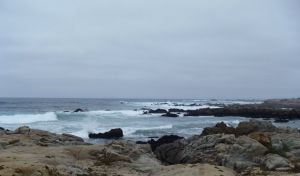 On a hill overlooking the point is the Point Pinos Lighthouse, the oldest operating lighthouse in California, which began warning seafarers in 1855 and is still working. Around the point and past a few amazingly expensive houses, I picked up a great coast walk trail, part of Asilomar State Beach, that meanders along one of the most beautiful sections of the Monterey Peninsula’s coastline. At low tide, the coves and pools are delightful; at high tide, the winter surf is spectacular. At the end of the trail I was tiring and a chilling wind started to blow, and so, on Moss Beach I ended my walk.

I encourage you, wherever you are, to go out and get to know all that lives around you. Take a short or long walk and a long look. 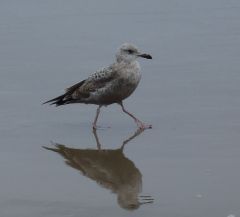 I’ve  lived here for nearly 30 years, but with each walk and paddle, I see animals and interactions that are new to me. That’s exciting. Although it’s great to learn about wildlife via books, images, lectures and blogs, it’s not the same as having a heron stand before me, a baby sea otter cry for mom next to me, or a seal catch a fish in front of me. Cherishing our wild neighbors (whether we like them or not) and protecting their homes (which is also our home) is the best hope we have for our future on this planet.