To end the old year and ring in the new, I went whale-watching with my friend Nora (and a boatload of other people). It was a chilly, beautiful blue-sky day with light winds. This time of year pregnant gray whales migrate (rather rapidly) along our coast heading south to their calving grounds off Baja California. (In the spring the migrators are more leisurely, especially females with new calves.) 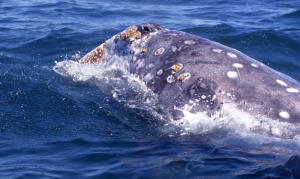 This annual whale trek is a wonderful excuse for getting out on Monterey Bay. Even though gray whales (Eschrichtius robustus) are seldom exciting, it’s fun to welcome them back and I never know what I’ll see given the bay’s topography of nearshore shelf in close proximity to deep canyons. It’s not unusual to spot comingling coastal and pelagic species.

Conditions were good for spotting misty whale blows (exhaled breaths) and it didn’t take long to find several small groups of grays. We joined a cooperative group of 3 or 4 adults (hard to count because they weren’t close together and didn’t all fluke-up — that ahhh tail-up moment whale-watchers love as a whale dives). Our group did, however, follow the typical gray-whale pattern of three or four blows followed by a 5-minute-or-so dive, then another series of blows followed by another dive. We stuck with them for nearly an hour as they trucked south. These grays appeared heftier than ones I’ve seen in the past, maybe due to impending births.

There have been two unusual sightings of gray whales in recent years. In May 2010 a gray whale was spotted twice in the Mediterranean, an odd occurrence because there haven’t been gray whales in the North Atlantic since the 1700s. According to the research paper, this animal was most likely a vagrant from our eastern North Pacific population. The researchers suggested that shrinking Arctic Sea ice due to climate change may allow gray whales to recolonize the Atlantic. Time will tell.

Back in the Pacific, in 2011, a western gray whale with a satellite-monitored radio-tag was tracked swimming from off Russia across the Bering Sea and Gulf of Alaska to the coast of Oregon until the tag quit.  “Flex,” as he was named, surprised scientists. They didn’t think the western Pacific and eastern Pacific populations mixed. The western Pacific group is listed as endangered; the eastern Pacific group was recently delisted due to its remarkable recovery. The question now: Is there just one Pacific population? The research continues to answer the questions that arose from following Flex.

But back to my whale-watching. To explore more, we broke away from our grays and headed to the edge of the Monterey Canyon. We were soon fortunate to find and get into the middle of a group of hundreds of Risso’s dolphins (Grampus griseus) accompanied by Pacific white-sided dolphins (Lagenorhynchus obliquidens). It’s exciting to watch Risso’s all around the boat (knowing that every splash is a dolphin).

We even found ourselves in a nursery group and could easily contrast the large adult dorsal fins with the little calf fins. At one point two separate Risso’s groups came together and the splashes calmed around us as they greeted one another. I could have stayed forever, but time was our enemy and our captain (reluctantly) turned the boat back toward shore.

My thanks to Monterey Bay Whale Watch, Nancy Black, Kristin and Isaiah (sorry if misspelled) for a great trip, and to Nora for sharing a great start to the new year.