Dead on a beach 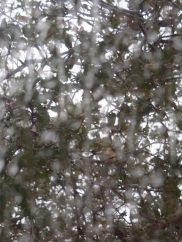 I haven’t posted much lately, and I’m going to blame the sunshine. This is the first rainstorm that we’ve had this year, and only the second of our winter rainy season. It’s just been too nice outside to sit inside and write. So here I am today.

Given the gray and gloom, I thought I’d write about why I like walking Del Monte Beach so much. It’s considered by some to be the “trash” beach of the Monterey Peninsula. Maybe it’s the currents or the harbor breakwater, but it seems that most of what dies at this end of Monterey Bay ends up on Del Monte Beach. That, for me, is what makes it so interesting. I love being witness to the cycle of life and getting a glimpse, sometimes an unpleasant one, of what’s happening in the bay and along the coast. 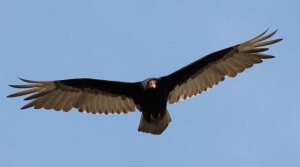 Caution: This post contains pictures of dead and decaying animals. If that sort of thing bothers you, you might want to move to a more lively post.

A signal that there’s something interesting on the beach are the turkey vultures (Cathartes aura). I grew up calling them buzzards and have always been fascinated. Sometimes I see them overhead, but I usually find them working on whatever has landed on the sand. Even though I’m walking only a few hundred yards from a major road, the sight of them always transports me to another age when large vultures were as common on beaches as joggers and dog walkers today.

Turkey vultures don’t seem fussy about what they eat. I’ve seen them eating mammals, birds and fish. I commonly spy them dining on dead sea lions. 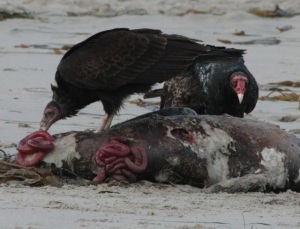 If you stand still, you can watch them for quite some time (if no one else scares them off). This winter is shaping up to be like those of the last two years with weak, hungry and sickly young sea lions stranding themselves on beaches. Right now Southern California is getting more of them than we are. Experts believe the young sea lions are not finding enough food, but aren’t sure why. Warmer water conditions (possibly related to climate change) are often blamed. NOAA (National Oceanic and Atmospheric Administration) sometimes declares a mass die off as a Unusual Mortality Event (UME), as was done in 2013, which scientists investigated. The cause of that event is still undetermined, according to the NOAA website. I’ve found no UME declared for this year’s sea lion strandings — maybe the rescues are high and deaths are low.

There’s definitely a UME happening this winter. Thousands of young Cassin’s auklets (Ptychoramphus aleuticus) have washed onto beaches from Canada to Southern California. On one short beach walk I counted 50 dead birds. This is very unusual. These are seabirds that I’ve seen on whale-watching trips, not on beach walks. 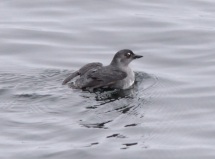 Necropsies have shown that the birds are starving — not enough zooplankton (tiny drifting animals) to eat. Again, no one’s exactly sure why. This past year we’ve had little upwelling (shifting currents allowing deep, nutrient-rich water to come to the surface). Without the nutritious water, there’s less zooplankton, and so less food for auklets. It’s sad to see so many emaciated feathered bodies with blue feet littering the beach. 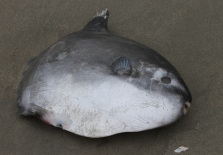 A common sight every year, usually in the fall, are dead ocean sunfish (Mola mola). These fish are without fins and eyes. They’ve been victims of a tough frisbee game — a sea lion grabs a fin and throws the sunfish to tear it off (presumably to eat). Without fins, the fish are unable to swim, get caught in currents and tossed onto the beach.

Gulls are responsible for removing the eyes. The beached sunfish are always young and about the size of a hubcap. The adults are much larger and likely too big or too tough for sea lions. In January I saw more sunfish than usual, and that also may be attributed to the winter’s warmer water.

Dead crabs and crab carapaces (shells) are very common, especially during the summer. To grow, crabs molt (shed the old shell) and this litter traces the tideline. Most of the crabs are less than an inch (2.5 cm) in size. This sheep crab (Loxorhynchus grandis) was the exception at nearly a foot (30 cm) across. This was a rare sighting — I’ve only seen one like this so far. I was sure it was dead, but too chicken to test if it was the whole crab or only the carapace encrusted with barnacles. 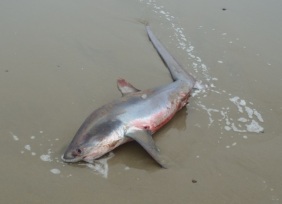 This last animal was a very unusual sighting — a thresher shark on my beach. I couldn’t believe it. The gulls and vultures were enthusiastic, too. I’m not sure of the species: a common thresher or pelagic thresher (Alopias sp.). The fish was intact and had no bite marks or other open wounds on it, but it was, as you can see, bruised and bloody. If I were to guess at the cause of death, I’d say that it was caught, and died in the net or after it was released. I don’t know what else would cause those bruises. It’s a beautiful animal (as are all of these, especially when alive in the water). I’m sad they died, but glad they ended up on my beach, making my walks more interesting and enlightening me to what lives in the bay, while worrying me about how our ocean is changing.

2 Comments on “Dead on a beach”