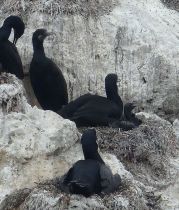 I started watching the Brandt’s cormorants on the breakwater in February when they evicted sea lions from the upper rocks. In April and May they worked ceaselessly building nests and tending them. I’ve watched the nest mounds grow, the rocks whiten and the sitting birds thin. This morning I spotted hatchlings.

From the public overlook I was excited to find one nest with two young. This week I’ll kayak by to look for more on the less accessible end of the breakwater.

I look forward to watching the parents deliver meals to these young ones as they develop over the next few weeks.